G-land located in Plengkung Bay, Alas Purwo National Park, East Java, Indonesia. G-land is one of the best premiere waves in the world. Peter McCabe make g-land the location of his favorite waves.

McCabe was the best surfer in the 1970s to the 1980s, although he is not young at the moment, McCabe still likes beaches and surfing. Now Peter McCabe is busy with his surfboard business.
Peter McCabe said that G-Land had been considered a home, even when in 1988 he returned to G-land, he was like finding his second home. 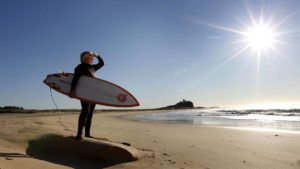 When G-Land Bobbys Surf Camp celebrates its 30th anniversary, McCamp says Bobby plays an important role in keeping everyone tied up and keeping together in G-land and staying connected to the place.

View all posts by: Desak Winda